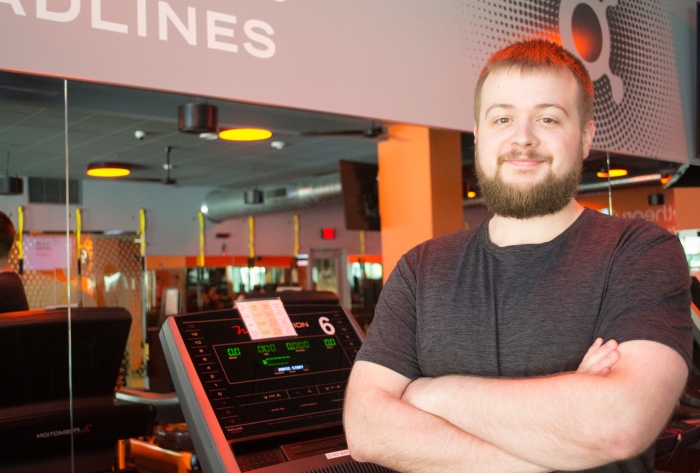 Aaron is a dedicated and humble guy who arrives to the studio early and ready for the unknown workout of the day. Patiently waiting for the day’s workout challenge, he sits quietly in thought.

For Aaron, coming to Orangetheory Fitness on a frequent basis has payed off. Since he began working out at the studio and maintaining a proper diet, he has reached his target weight by losing 40 pounds! Despite any barriers, he consistently followed his plan.

“I ended up enjoying it and never stopped.”

Before OTF Orenco Station opened its doors, Aaron spoke with Persia, then fitness consultant and now coach, about membership and how OTF incorporated the use of heart-rate monitors and how it gave metrics in real-time. Intrigued by the concept, he purchased a membership as a founding member.

His family has a history of diabetes and he knows people who are on dialysis. With that in the back of his mind, he knew he had to make positive changes in his health. Prior to taking classes he said, “I had been sedentary for over a year.” He knew that his fitnessjourney would be painful and difficult. However, the feedback and positive encouragement kept him going. Regarding the workouts he said, “I ended up enjoying it and never stopped.” OTF has provided him an “interesting” environment with a positive addiction to working out.

“I couldn’t have made so much progress and change in my life without the help and the encouragement of everyone at OTF. Thank you!”

He enjoys power days and everyone’s positivity in class, which keeps him coming back. When asked to describe OTF in one word he said, “challenging.” He now has a goal of seeing how far he can push his body and how much strength and endurance he’ll gain. He burns for abs and to lose his belly.

Aaron wishes he had the secret superhero power of regeneration to quickly recover his body when faced with intense classes at the studio. In the meantime, he’s going to have to get plenty of rest and water. He attributes his fitness journey success to other members and staff and stated, “I couldn’t have made so much progress and change in my life without the help and the encouragement of everyone at OTF. Thank you!”